How to Soften Pita Bread

Pita bread can be eaten when the bread is still hard, but it is more delicious when it is soft. Pita bread is a great addition to any meal, especially sandwiches. Softened pita bread makes it easier to take a bite, but it can be time-consuming. If you don’t have time to wait, I will show you how to soften pita bread in the oven, fryer, and microwave.

Also, you can soften the pita by heating it a little longer than usual or by placing it in an airtight bag with wet paper towels overnight.

What Is Pita Bread?

Pita is a kind of bread made with special flour with a slightly higher amount of gluten. The dough is kneaded, shaped into balls, rolled out into rounds, and baked.

The pita lies flat while it’s baking but then, as the moisture is released from the interior and expands inside the loaf, the bread balloons and splits.

It originated in Western Asia and Egypt and is used to make sandwiches, similar to how tortillas are used in Mexico. Also, it is used in the eastern Mediterranean, Balkan countries, and Africa, especially in East African cuisine.

The English and French names are spelled pita in American English and Canadian English; other spellings found occasionally are pitta (in British English) or pytta.

How to Soften Pita Bread

The best way to soften pita bread and other hard bread to make it as fresh as new is by turning on the oven. There are some other ways too. So here is a step-by-step guide.

How to Soften Pita Bread in the Oven

Freshly baked pita bread is delicious, but it tends to harden once it cools. If you have a few leftover pitas that are too tough to chew, you can soften them up in the oven.

First, place the pita bread in the oven and let them heat up for a few minutes until they’re soft enough to eat. Then, wrap it loosely in foil and heat it in a 350°F regular or convection oven for five minutes. Or drape the wrapped pita over your oven rack for one to two minutes. Be careful not to over-toast it (it will get crisp) or leave it in too long (or it will dry out).

Whether you’re looking to get perfectly soft, fluffy pita or toasting your pitas to perfection, an oven is one of the best and safest ways to accomplish either task.

How to Soften Pita Bread in the Microwave

You can soften pita bread relatively quickly in the microwave for a quick snack. Just gather your microwave, paper towels, and pita bread to get started.

You don’t want to heat it too long as this will dry out your pita bread.

How to Soften Pita Bread in the Air Fryer

Softening pita bread in the air fryer is very simple. Just preheat the air fryer on 260F for 3-4 minutes. This process does not require any oil, making it healthier than softening it in the oven, and of course, this method is much faster and easier than warming it up over a stove.

Once you take your pita bread out from the air fryer, let them sit for at least 30 seconds so that they can cool down to a temperature that is comfortable for handling.

However, the outcomes may vary depending on your particular air fryer, how it is calibrated and when it was made.

How to Soften Pita Bread on Stovetop

If this is the case, use one of these easy techniques for softening your pita bread:

Softening pita bread on the stovetop is easy and maybe an option if you don’t want to heat your oven or have an oven.

Whichever method you choose, be sure not to overheat the pita, or it will become even harder to chew. 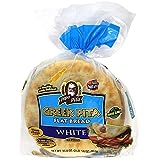 How to Prepare Pita Bread

You can prepare pita bread in many ways. It is best to have a pita oven to prepare them. If you don’t have a pita oven, you can use your kitchen oven and bake the pitas.

To cook pita bread on a griddle or large skillet, preheat an ungreased griddle or skillet over medium heat. Then, lay the pita circle on top of the hot surface and cook each side until they puff up, about 30 seconds per side. They should start to bubble on the top and bottom and be golden-brown when they’re done.

To prepare pita bread in the oven:

However, an authentic pita recipe is easy to make at home, and the results are well worth the effort. With a simple dough made of flour, water, salt, and yeast, you can bake several flatbreads perfect for dipping into hummus or using as pocket bread for sandwiches. Plus, pita can be frozen to enjoy later in the week.

How to Keep Pita Bread Soft and Warm

There are many methods for keeping your pita bread warm and soft. The most common methods involve heating in a conventional oven, oven, or microwave. You can also use the menu method to keep pita bread warm.

If you want to keep pita bread soft and warm:

Meanwhile, If your pita bread has turned stale, don’t throw it out. Instead, warm it in the oven or microwave to revive its freshness. To keep pita bread fresh and soft, store it in an airtight container or put it directly into the refrigerator.

How to Warm Pita Bread for Gyros

One of the best ways to warm pita bread for gyros is either in a skillet over medium heat or in an oven. Once the pita bread has warmed and you can fit a spatula under it, it is ready to use.

To warm pita bread for gyros. Just cut the pita in half along the equator, brush with olive oil, spread out on a baking sheet, and toast in a 350-400 degree heat oven for about 3 minutes. The pita will puff up and fill the baking sheet.

Meanwhile, to preserve the texture and pliability of the pita, we suggest lightly steaming it and then warming it in a dry pan or the oven. It can be done by adding a bit of water to the bottom of a deep skillet and bringing it to a simmer. Next, place the pita in the pan with the wet cloth, turn off the heat, tightly cover, and let sit for 1-2 minutes. Remove wet cloth before serving. Warmed pitas can also be heated in a toaster or under the broiler.

Once warm, pita can be used for making thin pocketless sandwiches or as an appetizer for dip and vegetables.

Every step given in this post on how to soften pita bread depends on which kind of pita bread you buy, but in general, you can pop it in the microwave for roughly ten seconds. If you don’t want to do that, you can use your oven or a toaster oven to heat it up and soften it. You will then be able to squeeze the bread, and it should be soft enough to mold.